Holly on Hollywood – The Christmas Chronicles 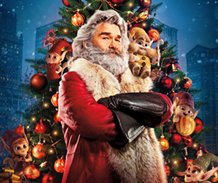 Holly on Hollywood
“The Christmas Chronicles”
by Holly McClure

THE CHRISTMAS CHRONICLES opens with video scenes from years past of a dad (Oliver Hudson), year after year, ushering in the Christmas spirit with his family. But this Christmas, Teddy (Judah Lewis) and Kate (Darby Camp) are having a tough time after losing their firefighter father in a fire while saving others. When mom ( Kimberly Williams-Paisley) has to work on Christmas Eve, Kate longingly looks at the old videos and discovers a glimpse of Santa (Kurt Russell). She convinces Teddy to help her trap Santa and through a series of events, the two wind up on Santa’s sleigh, causing him to crash. Teddy and Kate join Santa on a wild adventure to save Christmas before the world descends into violence and chaos.

The PG rating is for older kids to adults because of mild language, kids grieving the loss of their father, cartoonish violence and mayhem, CGI elves that are sometimes a little scary looking and a scene where Santa is unfairly arrested and put in jail. There are positive themes about family unity and believing in yourself. I loved Kurt Russell’s performance as a Santa with a sometimes gruff exterior who speaks multiple languages, knows the past of everyone he meets, loves to sing rock n roll, gives kids a chance to redeem their naughty side and right their wrongs. Ultimately, it’s revealed that Santa “allowed” things to happen as they did so that the kids who don’t believe and are having a hard time, can have a Merry Christmas. My favorite scenes were what Santa’s bag looks like on the inside, his magical workshop, hall of letters from kids…I loved the reindeer and eventually warmed up to the elves! This was a family affair for Russell, his lifelong love, Goldie Hawn, plays Mrs. Clause. It’s the first time the two actors have shared the screen as romantic partners since 1987’s “Overboard”. Her son Oliver plays the dad. It may not be an instant classic the whole family can enjoy, but tweens and up will enjoy the excitement and adventure, with a happy ending that wraps things up nicely. This is a Netflix production.