Holly on Hollywood – The Case For Christ 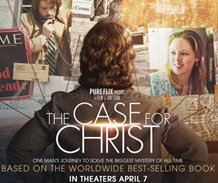 Holly on Hollywood
“The Case For Christ”
by Holly McClure

“The Case For Christ” is a drama based on the best-selling book by Lee Strobel, a former award-winning investigative journalist for the Chicago Tribune. In the early 80’s, Lee (Mike Vogel) was enjoying a successful career and a happy marriage with his wife Leslie (Erika Christensen). When a near-death experience with their daughter causes Leslie to question her atheist beliefs and become a Christian, it infuriates Lee, causing problems in their marriage. He begins a lengthy investigation to debunk Christianity by proving Christ’s resurrection never happened.

The PG rating is for mature themes and is best for…

…mature pre-teens to adults. Audiences have been bombarded with less-worthy ‘Christian’ films in the last few years that have over-saturated the market and possibly ruined it, for truly well-made films like this one. What sets “The Case For Christ” apart, is the creative and skillful direction of Jon Gunn, who brilliantly tells a compelling story that is beautifully and cohesively written by Brian Bird. I enjoyed the real husband/wife dialogue, scenes of Lee asking experts intelligent questions, and the fact that it never felt ‘preachy’. Christians will naturally appreciate the story of redemption and faith and delight in seeing that Lee became a pastor with grown children involved in the ministry. Simply put, the ‘case’ for this movie is that even the toughest skeptics will find Lee’s journey interesting and thought provoking…especially atheists. If you know people who are interested in faith but not there yet, this is a perfect movie to recommend.