The BFG is a live-action adaptation of a classic children’s story by Roald Dahl (Charlie And The Chocolate Factory to Matilda), about an orphan named Sophie (Ruby Barnhill) who is taken during the night from a London orphanage by a giant named Runt (Mark Rylance). BFG (‘Big Friendly Giant’ as Sophie likes to call him) takes the 10 year old to his home in Giant Country where the two become friends. Sophie learns his strange language while hiding from the tormenting, cannibal giants who live in the land. BFG shows Sophie how he became a dream-catcher by collecting dreams from a magical tree and distributing them to the people of the world. Sophie comes up with a plan to… 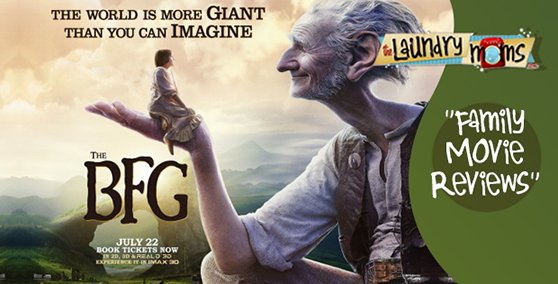 …protect her new friend (and the world) from the threatening giants all they have to do is give the Queen a dream!  Bill Hader, Jemaine Clement and Penelope Wilton also star.

This PG family-friendly fantasy is brought to you by the two brands known best for family entertainment, Spielberg and Disney, who give us a breathtaking world of make-believe. If only Dahl could see his magical words on the big screen, he would’ve been amazed by the incredible CGI special effects that bring BFG (and his world) to life, in a beautiful realistic and stunning way. One of my favorites, John Williams, delivers a lovely score that takes you on a journey of emotions, along with wonderful scenes like BFG’s dream-catching world and a funny breakfast scene with the Queen in her castle.

I love Spielberg’s old fashioned style that reminds us how PG family films should be – heartwarming, funny, at times a little scary and magical, while delivering a touching message of friendship and accepting each other’s differences. This is one that kids from 4 to 94 will enjoy!