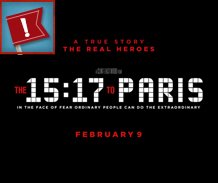 Holly on Hollywood
“The 15:17 to Paris”
by Holly McClure

“The 15:17 to Paris” is about the attack that took place on August 21, 2015, when a man named El-Khazzani, armed with an AK-47, a pistol, and a box cutter, opened fire on the passengers traveling aboard a high-speed train from Amsterdam to Paris. The gunman was overcome by three young American passengers, two of whom were enlisted men: Spencer Stone, a 23-year-old Airman First Class; Alek Skarlatos, a 22-year-old Army National Guard Specialist, on leave from his deployment in Afghanistan; and their long-time buddy Anthony Sadler, a 23-year-old senior at California State University. This is the story of how their lives shaped them and led them to that moment. Judy Greer and Jenna Fischer play the boy’s single moms.

The PG-13 drama is more for mature teens to adults. The movie is directed by Clint Eastwood who decided to use the real men to portray themselves. The re-enactment begins on the train but flashes back to how the boys met in grade school and progresses through their lives, showing us examples of how life, jobs and the military, prepared them to handle what happened on the train. Ironically, although it is an authentic representation using the real men, Eastwood should have used actors to bring a more dramatic and realistic feel to the story. His vision of real-life heroism is admirable but not as exciting as a Hollywood version, which makes it feel like something is missing. I was so aware that the real men were trying to act, that it felt more like a documentary than a movie – until the terrorist scene on the train, which is intense and rewarding. Seeing the men get their medals for bravery in the end, leaves you feeling proud of the heroes and the lives they saved, but it’s not Eastwood’s best.