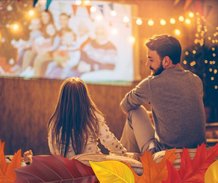 Thanksgiving – the great American holiday that brings people together to give thanks and celebrate with family, friends, food, football and fun! What better way to spend time together, than watching a movie. So here are a few family-friendly suggestions that will appeal to all ages…

Sandra Bullock plays a wealthy, no-nonsense Southern mom, Leigh Anne Tuohy, who takes in a homeless football prodigy, Michael Oher (Quinton Aaron) who eventually becomes a first-round NFL draft pick. Based on actual events, the story weaves a family together in the best of ways – particularly on Thanksgiving Day, when Michael causes the family to pause from watching their beloved football and give thanks for their meal and for one another!

What would Thanksgiving be without Peanuts? This Emmy-winning episode is particularly adorable, combining all the Thanksgiving essentials with Charlie Brown, his friends, Woodstock and Snoopy, who lends his own brand of charm to the day’s events.

Reggie (Owen Wilson) is the smartest gobbler in his flock. He knows his fellow turkeys are being fattened up for human consumption come Thanksgiving, though his dimwitted brethren are happily ignorant. Fortunately, fate puts our hero in the path of a muscular birdbrain (Woody Harrelson) and a magic doorknob that leads the duo to a time machine, which takes them back to the very first Thanksgiving.

Little ones will enjoy this adventure in the Hundred Acre Wood with Pooh, Piglet, Tigger and the rest of the gang, as they gather together for Thanksgiving dinner – complete with sing-along songs!

Loosely based on the actual historical Native American Indian named Squanto (Adam Beach), who was captured by English settlers and taken to England as a slave. Squanto escapes and is taken in by Monks who become his friends, teach him English and the ways of Europeans. When Squanto returns to America, he’s devastated to find his tribe wiped out due to illness. Amidst anger against the English for bringing the destruction of his family and village, Squanto manages to find forgiveness, settle things peacefully and celebrate the first Thanksgiving celebration.

Yes, this is a Christmas classic but it’s also a wonderful movie to begin the season, because of the NYC Macy’s Thanksgiving Day parade at the beginning. When the Santa Claus on the float gets replaced by Kris Kringle, he proves to a doubting little girl named Susan, that he is the real deal! What a perfect way to close out Turkey Day and get the kids excited for Santa!