Holly on Hollywood-Teenage Mutant Ninja Turtles: Out Of The Shadow

“Teenage Mutant Ninja Turtles: Out Of The Shadow”

Teenage Mutant Ninja Turtles: Out of the Shadows is a follow-up to the 2014 hit, with Leonardo, Donatello, Raphael and Michelangelo (Pete Ploszek, Jeremy Howard, Alan Ritchson, Noel Fisher) facing new challenges. The alien villain Krang (voiced by Brad Garrett ) helps The Shredder (Brian Tee) escape from a prison escort, so that both can… 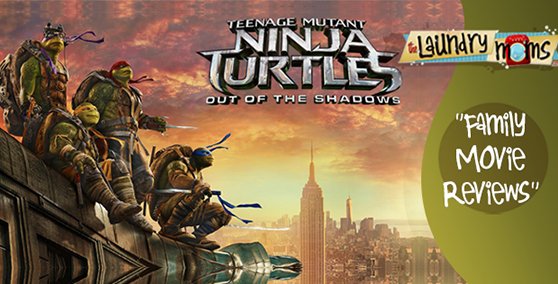 …build a giant technodrome war machine to conquer planet earth.  Megan Fox and Will Arnett reprise their roles of April and Vernon and aid the turtles with the help of a new ally, Casey Jones (Stephen Amell). Tyler Perry plays a goofy mad scientist and Laura Linney is the NYPD police chief.

The PG-13 is for brief mild language and sexual innuendos, lots of adrenaline-pumping action, fight scenes with martial arts, guns, explosions, a bar scene and an amazing sky diving from plane-to-plane scene, with a crash landing and battle on a jungle river. Fox unnecessarily dons a Britney Spears’ “Baby One More Time” looking outfit with a close-up on her cleavage. And there are several scenes with gross looking and behaving mutants, Bebop and Rocksteady. The CGI special effects and Turtle action is fun to watch, allowing children to enjoy the story without worrying about the characters outcome.

Cowabunga dude! There’s no question about who to root for in this good vs evil sequel with our hero teenage turtles who’ve grown up, come out of their shell and fight the bad guys, with the world looking on. Whether you’re a big kid who grew up in the 80’s & 90’s or a young fan, Out of the Shadows is a lighthearted fantasy that doesn’t take itself as serious as the recent string of Marvel and DC comic films – it delivers not only pizza, but what the fans have been wanting to see!