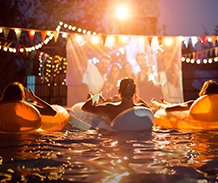 It is officially summer and that means time for vacations, summer camp, play days, road trips and movies!  Here are a few DVD suggestions that are sure to entertain the whole family. Parents, please be discerning concerning the PG-13 content.

1) Dumbo (PG) – is a live-action re-imagining of the 1941 Disney animated classic, about a baby elephant with oversized ears that help him to fly. Dumbo is born in a circus owned by Max Medici (Danny DeVito). Soon after, Medici sells his mother and the baby elephant is then looked after by former circus star Holt (Colin Farrell) and his children, Milly (Nico Parker) and Joe (Finley Hobbins). Dumbo becomes a star, trained to fly as an act with the beautiful aerial artist Colette (Eva Green), in a new circus called Dreamland. The ambitious owner, V.A. Vandevere (Michael Keaton) partners with Medici to exploit Dumbo but ultimately, almost destroys Medici’s circus and the family of performers who unite to save Dumbo!

The fantasy adventure is a retelling of the 1941 Disney animated movie that 78 years later, adds additional characters and storyline, to make it a must-see family film. Director Tim Burton brings Dumbo to life, with adorable big blue eyes that will melt your heart and a lovable personality that will delight all ages. When Dumbo flies – it truly is thrilling! The story includes actors Burton has worked with before (Keaton, DeVito, Green) and Farrell, who plays a wounded WW1 vet returning to Medici’s struggling circus, where he once was the star. He brings a fatherly, loving parent role to the story. Although the plot has some dark themes (Dumbo and his mother are separated, Dumbo is forced to work, Milly and Joe are sad over the death of their mother), there are plenty of lighthearted moments, colorful circus acts, funny characters, breathtaking flights with Dumbo and themes of love, family and overcoming obstacles in life, to entertain kids 3 to 99! I enjoyed this newer version of the classic Disney tale – especially the surprise happy ending!

2) How to Train Your Dragon: The Hidden World (PG) – Hiccup (voiced by Jay Baruchel), is now chief and ruler of the Viking town of Berk alongside his beloved Astrid (America Ferrera) and faithful dragon Toothless. They have created a world where dragons live alongside the villagers in peace but that world is shattered when warlords decide to enslave the dragons to fight for them. Master dragon hunter Grimmel (F. Murray Abraham) decides to capture Toothless by using a female Light Fury dragon as bait. Toothless and Hiccup must find the legendary “Hidden World”, where dragons can live safely after the two save the Isle of Berk, one last time. Also voiced by Cate Blanchett, Gerard Butler, Craig Ferguson, Jonah Hill

This family-friendly 3rd installment has our lovable duo going up against Grimmel, who wants to kidnap and enslave dragons. There is an abundance of fight scenes with bloodless violence (occasionally played for laughs) between humans and dragons, funny moments (when Ruffnut (Kristen Wiig) annoys her captors), charming scenes (a mating dance between Toothless and his lady dragon), a sad scene (one character presumably falls to his death) and a “Hidden World” that is a colorful land (kind of an “Avatar” for dragons) with a bittersweet ending that brings closure to this final film. Complete with an all-star cast and positive messages for all about friendship, courage, love and loyalty.

3) Wonder Park (PG) – is a colorful adventure about ten-year-old June (voiced by Brianna Denski) who has a wild imagination that is encouraged by her mother (Jennifer Garner). The two build a magnificent toy amusement park in her yard, with rides that are run by her stuffed toy animals. When her mother gets sick with cancer and has to go away for treatment, June soon loses interest in her park, her friends and life, so her dad sends her to summer math camp. On the bus, June imagines that her dad needs her and escapes to return home to help him. Along the way, she gets lost in the woods and discovers her magical Wonderland in disarray, slowly being destroyed by darkness. As time runs out, June and her favorite animals join together to save her magical Wonder Park. Mila Kunis, Matthew Broderick, and Ken Jeong, join the voice cast.

The colorful, animated adventure, is kid friendly and has funny animal characters that will entertain the little ones and celebrates a girl who is smart in math, loves to invent things, solve problems, has lots of friends who enjoy her creativity and loves her parents. There are lots of laughs, slapstick comedy and a wonderful cast of characters who help June discover how to solve her problems in creative, “splendiferous” ways. But parents, the story also contains themes of a mother dealing with (and recovering from), cancer. Because of that, the darkness that is destroying Wonder Park is symbolic of the emotions June is dealing with in her own life. When she is told her mom has cancer, June becomes sad, depressed, doesn’t want to play with friends and loses interest in the Wonderland she created with her mom. It’s the wisdom of her mother that comes to June time and again, that sees her through the troubles and dangers of the land they created together. Parents may need to explain that symbolism to younger children. The theme of June’s light driving out the darkness creates the beautiful allegory that is the wonder in “Wonder Park”.

4) Lost In Space (TV-PG)  – Based on the popular 60’s television show where the phrase, “Danger, Will Robinson!” became popular, this remake takes place in 2046.  Humanity seeks to colonize other worlds after an extinction level event makes the Earth uninhabitable. The Robinson family are chosen for the Jupiter Colony program’s 24th mission. After an attack and a rip in space-time, the Robinsons and others find themselves off course and lost among the stars after crashing their Jupiter ship on a barely habitable, unexplored planet. The strange alien landscape holds incredible wonders and horrific dangers that the Robinsons have never seen during their lives. Stranded with the Robinsons are unsettlingly charismatic Dr. Smith and inadvertently charming Don West, two outsiders who are thrown together by circumstance and a mutual knack for deception. To survive, they must work together and make alliances with other humans who crashed on the planet and also a surprising non-human.

5) Captain Marvel (PG-13) – is an all-new adventure from a previously unseen period in the history of the Marvel Cinematic Universe that takes place in the 1990s, more than a decade prior to “Iron Man”. When a galactic war between two alien races causes a Kree warrior, Carol Danvers (Brie Larson), to land on Earth, she soon regains lost memories and discovers her former identity. Danvers was a pilot in the military and holds a secret in her lost memories that the aliens need. She joins special S.H.I.E.L.D. agent Nick Fury (Samuel L. Jackson) and discovers what that secret is as they battle the shape-shifting aliens who followed her. In the process, she saves the planet from an invasion and becomes Captain Marvel, one of the universe’s most powerful superheroes! Annette Bening, Djimon Hounsou, Jude Law also star.

The sci-fi fantasy adventure, has continuous action with numerous fight/chase scenes, space weapons, guns, ugly aliens and a couple of curse words, so parents, heed the rating. Larson is perfectly cast as Danvers. She exemplifies intelligence, strength, integrity, faces up to the enemy without fear, is the right woman to be Marvel’s first female heroine and is a fantastic role model. The story is engrossing and rewarding on many levels, encouraging the audience to look at a situation from both perspectives. There are positive messages of perseverance, integrity, overcoming doubt and watching a fearless, confident, mighty woman, become a superhero. This is an Avengers origin story introducing Captain Marvel, the beginning of S.H.I.E.L.D. and a young Nick Fury – which will connect the dots to the upcoming final “Avengers: Endgame” so stay for the credits to the very end, for a preview of what’s to come!

6) Shazam (PG-13) – In the DC world of superheroes, we have Superman, Batman, Aquaman and now…SHAZAM!  The new superhero is 14-year-old Billy Batson (Asher Angel) who’s been bounced around foster homes most of his life. Billy gets a final placement with a large foster family of lovable kids and cool parents who genuinely are glad he joined their “family”. One day Billy is mysteriously summoned to the secret lair of a powerful dying wizard (Djimon Hounsou) who gives him the magic to transform into an adult superhero (Zachary Levi) by saying the word “Shazam!”, for the sole purpose of keeping the evil seven deadly sins, from destroying the world. Billy shares his secret with his foster brother and the two discover all of the powers Shazam can perform. When his fame spreads, an evil Dr. Thaddeus Sivana (Mark Strong), finds Shazam and tries to destroy him to gain his powers.

Parents, the PG-13, comics-based, superhero comedy has lighthearted moments that are sure to appeal to younger kids but there are a few intense darker scenes as well, so the rating is for a good reason! There are several intense chase scenes and a few deaths by the scary/grotesque “seven deadly sins” monsters who appear out of black smoke, bite off a few human heads, throw a man out of a high rise window and chase children (no blood but they are scary looking). There is some mild language, Shazam and Freddy buy beer but spit it out after the first sip, characters go into a strip club to look for someone but only the outside is shown. There are uplifting themes about family, courage and taking a stand for what’s right. Sweet, kid-like moments when Billy and Freddy discover Shazam’s superpowers when Bill dances on a floor piano like in “Big” and scenes kids will appreciate when Billy defends Freddie against school bullies. The story is sort of a mixture of “Big” and “The Goonies” with an 80’s feel to it. The valuable lesson Billy learns is that a supportive family is the most valuable superpower of all! In the end, when the siblings come to help Shazam take on the monsters, an unusual event takes place that unites them all and sets up a happy ending for a sequel.  Be sure and stay for the credits to see what comes next!