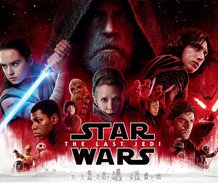 “Star Wars: The Last Jedi” is the eighth film in the final sequel that revolves around Po Oscar Isaac) and the last of the Resistance fighters facing the First Order under the command of Leia (Carrie Fisher). Rey (Daisy Ridley) tracks down Luke Sky guywalker (Mark Hamill) in hopes of convincing him to join the Republic’s mission and help turn the tide for the Resistance in the continued fight against Kylo Ren (Adam Driver) and the First Order. And a revived Finn John Boyega teams up with Rose (Kelly Marie Tran), a technician who lost her sister in a resistance fight. The two carry out a risky scheme to shut down the First Order’s tracking system. Andy Serkis, Laura Dern, Benicio del Toro and a cast of others also star.

The PG-13 fantasy drama has plenty of action, several standout lightsaber fights, funny scenes (Chewbacca’s interaction with the adorable porgs), a few sad ones, lots of action and beloved heroes who move the story forward. There are several strong female characters, from Rey who is on a journey to find the truth about her parents and who she really is, to new additions who are courageous and fierce leaders. There are strong male roles as well; Po, Finn and Luke, lay down their lives in battles to save others and a hint at the younger generation of Jedi being prepared for the fight! Rey learns more about her connection to the Force and puts everything on the line to give Kylo Ren an opportunity to become Ben again. There’s a sweet tribute in credits to Carrie Fisher (for her last role) and a surprise cameo from one of Luke’s long-gone mentors! Purists may find fault with the way the script was written that doesn’t give us much back story on the important plot points but for fans of the series – it delivers! The moment the title appeared on screen and the music started – people cheered and a good time was had by all – I’m hoping that happens in every theater because it made it a fun experience for the audience. I’m old enough to remember seeing the very first Star Wars movie (a long time ago in a galaxy far, far away) and the fans were just as crazy about it then – as the new generation of Star Wars fans are today!