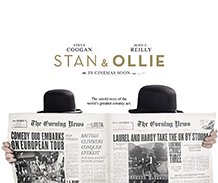 Stan & Ollie tells the touching story of the final days of the remarkable partnership of Stan Laurel (Steve Coogan) and Oliver Hardy (John C. Reilly), the greatest double comedy act in the history of movies. The story focuses on 1953 when the now aging comics are on their own and have embarked upon a stage tour of the United Kingdom and Ireland, hoping to secure funding for a new Robin Hood movie.

This is a compelling PG story of the legendary comics lives with superb performances by both men who act and sound like their characters. I grew up watching the comic duo in old movies like The Music Box (1932), Sons of the Desert (1933), and Way Out West (1937). This is a sweet homage to Stan and Ollie showing their friendship, marriages, and careers in their final years. Laurel wrote the comic bits and was the more burdened star, Hardy was a jolly big man who let Laurel do all the work. Lots of cigarette smoking (accurate for the era) and social drinking but the wives try to keep their husbands from drinking. Earlier habits and failures are mentioned but this is not a bio of their entire lives. Instead, it’s full of sweet old fashioned moments with talented actors, beautiful era sets and clothes, and examples of the comedy routines that made them famous. I thoroughly enjoyed this movie which will appeal mostly to mature pre-teens to adults. It’s a great example (for younger generations), of the first stars of stage and screen who blazed the path for comedy routines in movies today.