Holly on Hollywood – Spider-Man: Into The Spider-Verse 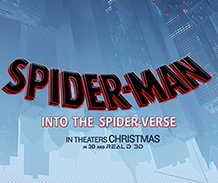 Holly on Hollywood
“Spider-Man: Into The Spider-Verse”
by Holly McClure

SPIDER-MAN: INTO THE SPIDER-VERSE is not a retelling of the old tale but an animated version about Miles Morales (Shameik Moore), who’s bitten by a radioactive spider and starts to experience changes he can’t explain. He finds a mysterious underground lab where Miles discovers Peter Parker/Spider-Man (Jake Johnson) trying to stop greedy crime boss Kingpin (Liev Schreiber) from opening a hole in the space-time continuum, which could destroy New York. Spider-Man is mortally wounded, but Kingpin’s experiment produces another, older Peter Parker from a parallel universe. Miles asks him to mentor him and advise him and together, they meet four more “Spider-people,” including teenage Gwen Stacy (Hailee Steinfeld), an anime-style girl (Kimiko Glenn), a cartoon pig (John Mulaney), and a black-and-white 1930s noir Spider-Man (Nicolas Cage). Everyone works as a team to defeat Kingpin and return to their own universes.

Parents, the PG rating doesn’t mean it’s kiddie friendly. The animated cartoonish violence has lots of fights that include guns, injuries, and even the death of one version of Spider-Man and an important supporting character. There’s lots of action, suspense, and mortal danger as well as a funny, action-packed, animated Marvel adventure, that will appeal more to tween Spidey fans and adults. The story introduces each character explaining their story and showing how the various Spideys unite to share their strengths and defeat their enemies. Moore is charmingly nerdy but cool, Johnson is hilariously jaded, Cage is a darker character and Mulaney’s Spider version is the funny one. There are clear messages about friendship, courage, mentoring, perseverance, teamwork and teachable moments. It took me awhile to get used to the animated version because I’m more of a live-action fan myself but it was entertaining and I can see how true Spidey fans will enjoy it. Kids and tweens can read the original Miles Morales comics and author Jason Reynolds’ young-adult novel about the young superhero.