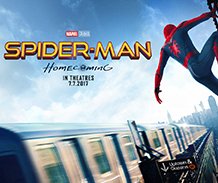 “Spider-Man: Homecoming” is the latest Marvel approach to the classic story of Peter Parker/Spider-Man (Tom Holland), a shy, nerdy teenager who is secretly a superhero for the Avengers and Tony Stark/Ironman (Robert Downey Jr.). Although he’s “looked after” by Stark’s best friend Happy (Jon Favreau), Peter wants to do more than just be a “friendly neighborhood Spider-Man”.  He gets his chance to prove his Spidey skills when he stumbles on villains stealing futuristic alien gear (left when New York was attacked in the first Avengers movie) to use in crime sprees and sell to criminals. Spiderman springs into action to face a new villain, Adrian Toomes/Vulture (Michael Keaton), save New York and prove to Tony that he is indeed, an Avenger. Chris Evans and Marisa Tomei also star, along with a cameo by Gwyneth Paltrow.

The PG-13 rating is for some brief crude language and mild violence between Spiderman and the bad guys but nothing graphic or too intense. Keaton is a super cool villain – he’s…

…the likable every-day-man who isn’t intent on destroying the world but definitely has an evil edge. I also enjoyed the inside joke of him playing the flying Vulture character post his Birdman role, not to mention he also played Batman. The title (Homecoming) refers to the subplot of Peter’s high-school dance but in truth, it’s a metaphor for Spider-Man finally joining the Marvel team. One of my favorites, Captain America, makes his appearances in Public Service Announcements which are very funny but it’s his final announcement (at the end of the credits) that delivers his funniest lines in true Marvel fashion. In truth, I wasn’t expecting to like this latest addition to the franchise but I was pleasantly surprised. The story is entertaining with clever gags, a well written script (I loved his best friend Ned asking tons of questions when he finds out Peter is a superhero… “Do you lay eggs?” “Do you spit venom?”), and a cast that makes Spider-Man: Homecoming” the best in the franchise, another hit for Marvel and one of the must-see movies this year!