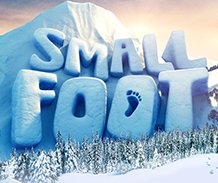 “SMALLFOOT” is an animated musical adventure that takes place in the Himalayan mountains, where a community of yetis lives. When Migo (voiced by Channing Tatum) sees an airplane crash, he comes face to face with a “smallfoot” (human).  He runs to tell his fellow villagers about his discovery but is met with skepticism. Their wise leader, Stonekeeper (Common), insists that Migo is lying and he is exiled from the village. Migo joins Meechee (Zendaya), the Stonekeeper’s daughter who leads a group also searching for smallfoot. Migo goes beneath their mountaintop clouds and discover the human’s village in the valley underneath. There he accidentally meets Percy (James Corden), a wildlife reality TV show host searching for Yeti’s and the two become friends, (even with a language barrier).

The PG rating is truly a family-friendly, entertaining, charming, animated musical adventure with something for little ones to adults. The story, about a group of yetis who prove the existence of humans, has colorful characters, realistic animation (love the fur!), funny dialogue, looney tunes-style calamity, cute songs and stars voices who made their characters likable; Channing Tatum, Zendaya, Common and James Corden. And there were great messages about being brave, taking risks, asking questions, respecting traditions, accepting people who are different from you, forgiving mistakes, being kind, and a reminder that none of us are perfect. This is a new family classic all ages will enjoy!
“Remember to Choose Your Movies Wisely”