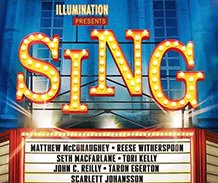 “Sing” is an animated comedy about Buster (Matthew McConaughey), a koala who puts on a talent contest in order to raise money for his financially troubled theater. Only problem is, his secretary accidentally offers a $100,000 prize instead of $1,000, to a multitude of promising contestants who sign up with dreams of becoming a star. There’s Johnny (Taron Egerton) – a gorilla who sings like Sam Smith, Rosita (Reese Witherspoon) – a stressed housewife of 25 piglets who dreams of stardom, Mike (Seth MacFarlane) – a crooning mouse, Meena (Tori Kelly) – a shy elephant, Jennifer Hudson, Nick Kroll and more.

The PG, Pixar-kid-friendly movie is full of funny slapstick humor, silly jokes, bunny singers wagging their cotton tails singing, “oh my gosh, look at her butt!”, and mild insult language. The A-list voice cast singing covers of hit songs, mixed with a reality talent show premise and cute animal characters, make it appealing for families with young kids but also for adults who’ll enjoy the music and trying to guess which actor’s voice goes with their animated character (McConaughey fooled me as the energetic koala)!  I enjoyed the creative scenes like Rosita finding her groove in a grocery store and messages about finding your voice, following your dreams, teamwork, courage, and perseverance. Sing will leave you with a smile, singing your favorite song!