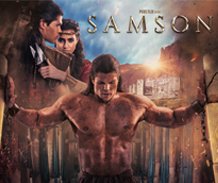 “Samson” tells the biblical tale of the handsomely strong warrior chosen by God to deliver Israel. At birth, Samson’s given a list of certain things he must do to keep his strength. One of them is never cutting his hair. When his impulsive and youthful ambition leads to a tragic brief marriage, the all-powerful Samson (Taylor James) seeks revenge. As his brother mounts a tribal rebellion against the Philistines, Samson’s personal quest tragically leads him to fall into the hands of the seductress Delilah (Caitlin Leahy), the Philistines’ Prince Rallah (Jackson Rathbone) and King Balek (Billy Zane), where he calls on God for his final victory. Rutger Hauer and Lindsay Wagner play Samson’s parents.

The PG-13 bible epic is mostly for older kids to adults because of battle scenes. Whenever Samson needs to do something powerful, he prays and is filled with God’s power. Filmed entirely on location in South Africa, the familiar story is told with a believable look and feel, that the famous bible story deserves. The dark haired, handsome, chiseled, Nazirite-looking James, is a dynamic Samson who passionately stands out from the rest of the cast.  But I had a problem with the Caucasian brother (wearing a really, really bad wig), the older “Bionic Woman” mom and everyone’s favorite “Blade Runner” dad, looking like they aren’t related at all to Samson. This is a formula Bible story with impressive fight scenes, believable CGI special effects and a story of strength and passion, with a heartfelt message of redemption, God’s grace and hope.