Holly on Hollywood – Run the Race 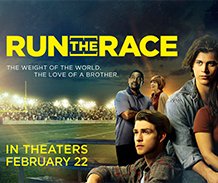 Holly on Hollywood
“Run the Race”
by Holly McClure

RUN THE RACE is faith-based high school sports drama about a promising high school football player Zach (Tanner Stine) and his supportive brother, David (Evan Hofer), who struggle to overcome the death of their mother from cancer, the abandonment of their alcoholic father,  life-changing injuries, and financial struggles. As the two struggle to get ahead in life they are supported by their Godmother (Frances Fisher), their coach (Mykelti Williamson) pastor (Mario Van Peebles) and Zach’s girlfriend (Kelsey Reinhardt).

Parents, the PG-rated drama will appeal more to the pre-teen to adult crowd because of mature themes. There are a few scenes of drinking, a party, a fight, dating and (spoiler alert!) the death of a key character. The brothers face challenges with balancing school, jobs, dating, life, and faith, ultimately earning a scholarship to escape their small-town-dead-end existence. Dave doesn’t preach, he simply lives his faith by example. Zach rejects faith as he struggles with anger over the death of his mother, his broken relationship with his father, and frustration with their circumstances. I enjoyed the real dialogue and questions Zach has about faith and doubting God – it will speak to many who have asked those same questions! Stine has a charismatic screen presence, especially with co-star Reinhardt. There are positive themes about the power of sacrifice, family and the power of forgiveness. Sports fans will enjoy seeing the Executive Producer Tim Tebow making a cameo appearance along with fellow Heisman Trophy winner Eddie George.
“Remember to Choose Your Movies Wisely”