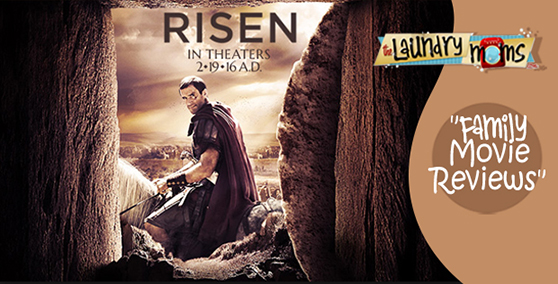 Risen is a Biblical resurrection story told through the eyes of Clavius, a Roman Tribune assigned by Pontius Pilot to maintain law and order immediately after the crucifixion of Jesus, a man many called “King of the Jews”.  When Jesus body is discovered missing from the burial tomb, Clavius is again put in charge to track it down in order to disprove the rumors of a risen “Messiah” and prevent an uprising in Jerusalem. Starring Joseph Fiennes, Tom Felton, Peter Firth and Cliff Curtis as Jesus.

The PG-13 bloody wartime violence and crucifixion scenes, make it more for mature teens to adults. Director Kevin Reynolds presents this well-known Biblical account from a pagan perspective, brilliantly and realistically portrayed by Fienes. Felton (from Harry Potter fame) plays a young centurion who assists Clavius as he searches for answers that ultimately lead to truth. I enjoyed Curtis’ unique and realistic portrayal of Jesus who was full of love and forgiveness in the weeks before he ascends.

Risen is not another preachy Jesus movie. The fictional account surrounding the most important event in human history is mixed with Biblical truths like a Roman CSI. Not since The Passion of the Christ, have I seen the quality of writing, directing and acting, like that seen in Risen.