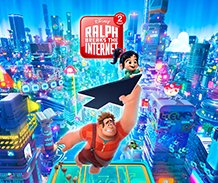 Holly on Hollywood
“Ralph Breaks The Internet”
by Holly McClure

RALPH BREAKS THE INTERNET is the sequel to the popular video-game adventure Wreck-It Ralph. Ralph (voiced by John C. Reilly) is happy being the star of his own game in a little arcade and hanging out all night with his best friend with Vanellope (Sarah Silverman), the star of her game, Sugar Rush. When her game breaks, Ralph and Vanellope enter the internet to find a vintage game part to save her game. Ralph and Vanellope quickly discover a fast-paced world that gets them both in trouble and threatens their friendship. Gal Gadot also stars.

The PG rating is for kids 8 to adults because of animated action, a scary giant Ralph and kiddie potty humor/language. Inside the internet world are popular animated websites, social media platforms, etc. depicted in colorful ways that kids and adults will recognize. Vanellope gets her need for speed in a driving game called Slaughter Race that’s full of weapons, creepy clowns, and lots of danger, stunts, and crashes. A creepy insecurity virus turns into an intense giant Ralph-looking monster that threatens Ralph and Vanellope. My favorite scenes involve ALL of the Disney princesses (including Pocahontas, Mulan, Tiana, and Jasmine), voiced mostly by their original actors, who play a role in saving their new friends. There are messages kids and parents will appreciate like the internet can be both a wonderful and terrible place and that friends need to respect each other’s differences. Reilly and Silverman revive their bestie friendship. Gadot (Wonder Woman) delivers a perfect champion racer who becomes a new best friend. There are some good role model moments for boys and girls but a bit more violence and about 10 minutes too long. I took my grandkids (11, 9, 6) and the older ones really liked it and enjoyed recognizing the internet attractions but the giant monster Ralph was a bit scary for the 6-year-old. I think Disney movies are pushing the PG rating by getting edgier and darker for little ones but overall, this is a colorful, creative, fun and funny story, that shines a light on the wonders and horrors of the internet. But more importantly, it has an important message about having healthy friendships and following your dreams – even if they’re different than your friends.