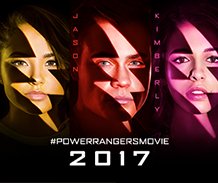 It’s Morphin time, go go “Power Rangers”! This reboot of the 90s TV show is about five misfit teens; Jason (Dacre Montgomery), Billy (RJ Cyler), Kimberly (Naomi Scott), Zack (Ludi Lin) and Trini (Becky G.), who are called to become the protectors of life on Earth known as, the Power Rangers. After a misadventure in an old mine that happens to be the ancient burial ground of a wrecked spaceship, the teens find a robot (voiced by Bill Hader) and Zordon (Bryan Cranston), the original Red Ranger of the Power Rangers. The team is trained to fight, morph into their power suits and ultimately, fight their archenemy, Rita (Elizabeth Banks) and her gigantic golden monster Goldar, to save their town.

..:sequences of sci-fi violence, mature themes, fight scenes, some language and crude humor. Parents, this is not the kiddie-friendly Mighty Morphers of the 90’s. Just when you thought the gay-character-in-a-kids-movie drama was over (BATB), we now have a gay Superhero, Trini, in a scene so vague, it will “morph” over most kids and adult’s heads. It takes way too long for our heroes to finally morph into their colorful suits but once they do, we basically get two different movies. One is a teenage drama dealing with serious issues – the other is a cheesy throwback to the TV show with an assignment to kill the evil gold-obsessed-villain, Rita. Overall, there’s a message of “stronger together” and showing love and concern for each other, as the superheroes crack jokes and save the day. My 10 yr. old grandson came out of the theater “playing Power Rangers” and except for a couple of “scary” Rita scenes – he gave a thumbs up for kids 10 and above.