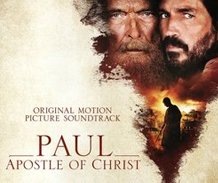 Holly on Hollywood
“Paul Apostle Of Christ”
by Holly McClure

“Paul, Apostle of Christ” opens in A.D. 67, with Paul (James Faulkner) in his 60s being jailed in Nero’s darkest and bleakest prison cell, for his teachings and beliefs. The story recounts his spiritual journey when he was Saul of Tarsus (Yorgos Karamihos), a high-ranking, slayer of Christians – to Christ’s most influential apostle. It’s also the story of Christ’s disciple Luke (James Caviezel), Paul’s friend, physician and transcriber, who (at great risk to his own life) smuggles Paul’s manuscripts (detailing the birth of the church and Christ’s teachings), out of prison. Nero is determined to rid Rome of Christians gleefully executing them in the cruelest ways possible. Bound in chains, Paul has survived floggings, shipwreck, starvation, stoning, hunger and exposure and now, he awaits his death  sentence. Mauritius (Olivier Martinez), the prison prefect, guards his famous prisoner with more kindness than most. Alone in the dark, Paul’s haunted by his past and feels forgotten, wondering if he has the strength to finish well.

The PG-13 is for some violent and brutal content with disturbing images of Christians being nailed to crosses, tortured, used as human torches at night (thus the term “Roman Candles) and brutally pursued by Nero. Because of the rating, much of it is implied rather than shown directly, including repeated visual references to the murder of a child and the execution of women and children for crowd amusement. The focus of the story is almost entirely on Paul’s final months in Rome and the creation of his biblical books. There are heated debates among the early peaceful Christian leaders (John Lynch, Joanne Whalley) who work to get their followers out of the increasingly dangerous city before violence erupts. Faulkner delivers his lines with dramatic conviction making the words of God come alive and penetrate with truth. Caviezel passionately brings Luke to life, with a stealth reminder of Jesus’ presence in the early struggle of the church. The scenic location of Malta adds even more gritty reality and reminded me of the movie “Risen”. This is a powerful story of one of the most influential men who penned the Bible and a testimony of how God can change even the most hardened heart, with the love of Jesus. Themes of perseverance, compassion, forgiveness and love.