Holly on Hollywood – Only The Brave 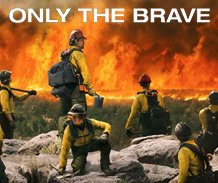 Holly on Hollywood
“Only The Brave”
by Holly McClure

Only The Brave is the heroic true story of the tragic loss of the Arizona Granite Mountain Hotshots, who were the elite of the elite, firefighters. The 2013 Yarnell wildfire spiraled out of control, killing 19 hotshots, the highest death toll for U.S. firefighters since 9/11. Only one member of the group, a lookout stationed elsewhere, survived the massacre. He lived to tell their story. Starring Josh Brolin, Miles Teller, Jeff Bridges, Taylor Kitsch and Jennifer Connelly.

The well-produced PG13 drama is for mild language, intense action and an emotional, traumatic scene, dealing with the death of wildland firefighters. This engrossing story shows the fraternity kind of brotherhood and their camaraderie and all-for-one attitude, as they train to become the elite “hotshots” with a backdrop of spectacular and realistic wildfires. Teller plays Brendan McDonough, a slacker who’s estranged from his ex-girlfriend, until he..

…discovers he’s going to be a father. He cleans up his act, joins the Prescott Wildland Fire team and bonds with Eric “Supe” Marsh (Brolin) who sees a younger version of himself and welcomes him to the brotherhood, nicknaming him “Donut”. Brolin gives a powerful, Oscar worthy performance in a role he embodies. He’s the brains, father figure, brother, boss – who does his best to protect his men. Connelly gives a passionate performance as Supe’s wife, Amanda, who struggles with wanting a family and more time with the husband she loves and adores. Bridges plays his best friend, Fire Chief Steinbrink, along with a cast of talented others. The Yarnell fire is gut wrenching, traumatic and hard to watch, with realistic and intense out-of-control wildfire scenes that visually dramatize the risks these men take to protect fires from spreading.

Only The Brave is the pinnacle, realistic tribute to wildland firefighters, with a similar feel ofLone Survivor.  Dierks Bentley performs his original song, “Hold The Light,” that effectively plays over end-credit images of the hotshots who lost their lives and the legacy of families they left behind. I cried through the end credits with awe and appreciation for what these men did and for the everyday heroes they truly are.