The movie “Mother’s Day”, is a lighthearted look at parenthood and the dilemmas a group of women and men face, leading up to a special and sometimes unusual, Mother’s Day. Sandy (Jennifer Aniston) is happily divorced until her ex-husband informs her he married a much younger woman, who is now the new step-mom. Jesse (Kate Hudson) has been hiding the fact that she’s married and has a child, from her parents who (she thinks) wouldn’t approve. Miranda (Julia Roberts) doesn’t have any kids and is focusing on her career, when she gets a surprise visit from a daughter she’s never met. Then there’s Bradley (Jason Sudeikis), a widower who’s trying hard to be the best parent for his two girls since their mom passed away but his idea of Mother’s Day is pretending it doesn’t exist at all, which causes problems. A cast of many others including Timothy Olyphant andHector Elizondo, also star… 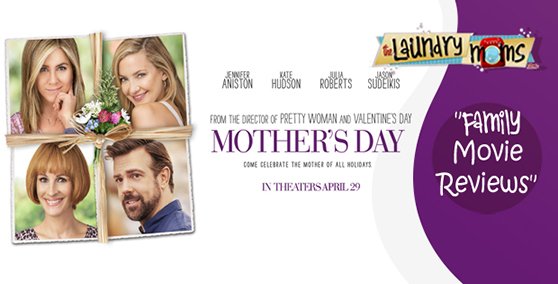 I know Mother’s Day has come and gone but this PG-13 comedy/drama is for those who want a pleasant, entertaining popcorn movie, with a few laughs and an old fashioned style of humor from Director Garry Marshall – who’s the main reason the star studded cast even did this movie! This is Marshall’s 3rd holiday movie (remember Valentine’s Day, New Year’s Eve?), his 4th time to work with Roberts (Pretty Woman was her first), his 18th time to work with Elizondo and it’s the 5thmovie Aniston and Sudeikis have done together. In truly keeping it a family affair, Robert’s 3 children and Marshall’s grandchildren also appeared in the film.

“Mother’s Day” is a lighthearted look at life with a star studded cast that will entertain mature teens to adults.