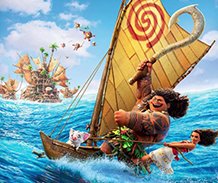 Moana Auli’I Cravelho), is the daughter of a chief on a Polynesian island who dreams of a bigger, more adventurous life and has a mystical bond with the sea. She goes on a mythic voyage to find Maui (Dwayne Johnson), the disgraced demigod shapeshifter whose theft of a mystical stone put Moana’s island (and the rest of the ocean) in peril. Soon, the two join forces as Maui gets to know Moana and teaches her how to navigate the ocean. The two stand against mythical sea creatures, a ship of rowdy coconut pirates and two violent monsters (one made of lava, the other a giant crab). Several songs like Moana’s “How Far I’ll Go” and Johnsons “You’re Welcome”, are part of an engaging score by Hamilton creator Lin-Manuel Miranda.

The PG kid friendly adventure will also appeal to adults…

The spirited princess is a great role model, demonstrating perseverance, curiosity, courage, and offering a positive message of self-discovery and empowerment. Johnson is perfect as the charming, self-absorbed, larger than life Maui, who spouts snarky lines like, “If you wear a dress and have an animal sidekick, you’re a princess.” But unlike other “Disney princess” movies, Moana is romance free because she’s busy trying to solve her people’s problems and has no time to find a prince. Moana is a perfect movie the whole family can enjoy together and no doubt, you’ll see Moana join the Disney Princess family.