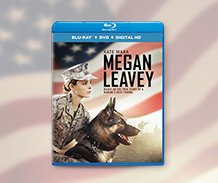 Megan Leavey is an inspiring true-life story about Megan (Kate Mara) a young Marine corporal who uniquely bonds with her bomb-sniffing combat dog Rex. Together they save countless lives during her deployment in Iraq. Common, Edie Falco and Bradley Whitford also star.

…several battle scenes with intense explosions, a scene where Megan and Rex are both injured, a supporting character that dies, language and an implied romantic relationship between Megan and another soldier. Megan comes from a broken home, has personal issues with her parents and socially doesn’t connect or have friends. Once she joins the Marine Corps’ K-9 unit she meets Rex, a German Shepherd considered too difficult to handle. Megan earns the dog’s trust and the two develop a bond that carries them through more than 100 missions until an explosion jeopardizes both their careers. There are strong messages about teamwork, perseverance, courage and dog lovers will enjoy the scenes of military training (how to sniff out explosives, attack the bad guys, etc.) which requires intense bonding and mutual trust.

In the end, you’ll feel a sense of pride and respect for the sometimes forgotten, four-legged heroes…be sure and stay through the credits to see pics of the real Megan and Rex.