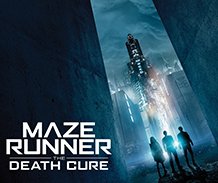 Maze Runner: The Death Cure,” is the third and final film in the book series. It opens with a spectacularly staged train rescue and continues with one action scene after another.  The story follows Thomas, Newt, Frypan, Brenda, and the rest of the escaped Gladers as they attempt to save Minho from being experimented on in the Last City, and avoid the evil Janson, who wants to kill them all. If their daring attempt fails, Vince will get the rest of the immune kids on a ship to travel to safety. And of course, all have to avoid the constant threat of zombies. Starring Dylan O’Brien, Thomas Sangster, Aiden Gillen, Barry Pepper.

Parents, the PG-13 is aimed at the teen audience but contains mature themes, strong language, explosions and deaths, so it’s not for younger children. There’s considerably more strong language in the movies than in the books, a high body count, lots of bad guys, big explosions, shoot-outs, a stabbing and a dramatic open and climactic close (both have been done in other movies but it still works) and deaths of several characters. Lots of action and intense scenes, ugly zombies attacking periodically, and a race to get the serum that will cure the world of the zombie plague. Thomas is a charismatic leader and the kids are smart, which is what makes the storyline interesting and moves it along. Gally (Will Poulter), makes a comeback as a good guy and ultimately, there’s a happy ending with most all of the characters and closure. There are themes of learning to trust, protect, and defend one another as well as teamwork, sacrifice and courage. This is an intense, action-filled closure to a teen book series that will please the fans but is definitely for mature teens to adults.