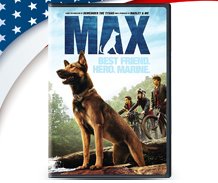 Max is out on DVD! The story begins in Afghanistan where Kyle Wincott (played by Robbie Amell) is killed in an ambush, his wounded service dog (that he trained from a pup), is traumatized, grieving the loss of his master and unable to continue serving in the military.

…his brother Justin (Josh Wiggins) is given the task of looking after the problem dog. Through unusual circumstances, the family is threatened and Max proves to be a hero to his family. Lauren Graham and Thomas Haden Church also star.

This PG, family-friendly film has plenty of intense action, amazing bike racing, family drama, funny moments, and the love and bond between dog and man that all ages will enjoy. It’s definitely not just a kids movie. Max will appeal to teens, adults, the military, dog lovers – anyone who loves a story about heroes and good overcoming evil! You’ll applaud with patriotic pride – just in time for the 4th of July!