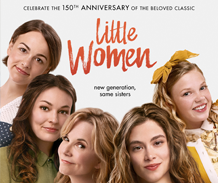 “Little Women” is a 21st century version of Louisa May Alcott’s classic 19th-century novel about the March sisters. It centers around the independent oldest daughter Jo (Sarah Davenport) and her life with her sisters Meg (Melanie Stone), Beth (Allie Jennings), and Amy (Elise Jones). The girls are homeschooled by their loving mother, Marmee (Lea Thompson), and all long to see their military father (Bart Johnson), who’s serving overseas for most of the movie. When Jo is in college she publishes a book about her life and family called, “Little Women”.

PG-13 is for teens who drink in a couple of scenes, Meg gets a little tipsy from drinking at her prom and at a high school party and kisses a boy who gets aggressive. Themes of finding your voice, girls becoming women and finding their place in life, makes it best for pre-teens to adults. Spoiler alert: Beth’s battle with cancer and Jo’s struggle with losing her in death, was hard for me since I just lost my younger sister to cancer – very emotional scenes! This is a modern-day take on Louisa May Alcott’s classic novel about the four March sisters, originally set in Civil War-era New England. The story is modernized with smartphones, computers, cars, etc. but retains the family structure that made the book endearing to so many. Themes of overcoming life’s obstacles, the importance of family, friendship, forgiveness and accepting people as they are. I enjoyed this modern day version celebrating old-fashioned family bonds and unconditional love.