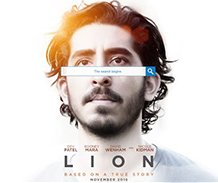 Lion is an incredible story about a 5 year old boy Saroo (adorable Sunny Pawar) who lives in poverty with his mom and siblings in India. One day he joins his older brother on a trip to collect things to sell, and accidentally gets separated on a train that takes him more than 1,000 kilometers away from home. Frightened and alone, the boy wonders the streets dodging horrifying circumstances until he’s put into an orphanage and adopted by a loving couple in Australia (David Wenham and Nicole Kidman). 25 years later, an adult Saroo (Dev Patel) longing for his real family, discovers Google Earth and begins to piece together the journey that will lead him home. Rooney Mara also stars.

The PG-13 includes a heartbreaking scene of…

…homeless children being abducted by men as they sleep in a tunnel, a young Saroo is almost handed over to a creepy man, adults discuss adoption and how it affects a family and a priceless, emotional scene of Saroo reuniting with his real family. Lion is a powerful biographical drama, that is slow at times but emotionally rewarding in the end, so it’s better for mature audiences. Both actors who play Saroo are perfectly cast in an almost unbelievable true story with a strong underlying message about perseverance, family bonds, the power of a love and the life-changing technology that lead a lost boy home.