Holly on Hollywood Life Of The Party 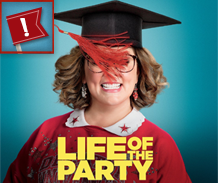 Holly on Hollywood
“Life Of The Party”
by Holly McClure

Life of the Party stars Melissa McCarthy as Deanna, whose husband announces he wants a divorce and has left her for another woman, literally right after they drop their only daughter, Maddie (Molly Gordon), off at college. Devastated, Deanna decides to return to college to complete her archaeology degree. She moves into a dorm, hangs out with her daughter, befriends Maddie’s friends (who adopt her as their mascot and foster-mom), sleeps with a student half her age (Luke Benward), drinks a lot, accidentally eats marijuana cookies, does “the walk of shame” after a night of partying, becomes a sorority sister – and still manages to be friends with her daughter when she graduates.

The PG-13 adult comedy has language, sexual references and implied sexual situations but no nudity or actual sex scenes. This is not as raunchy as some of McCarthy’s other films (Bridesmaids, The Heat), but it’s definitely rude, crude and inappropriate for children and pre-teens. McCarthy is a talented actress and funny comedian who brings life and energy to every role, along with her zaftig physical comedy. But under the direction of her writer-director husband (Ben Falcon), even though McCarthy is warm, lovable and funny, she still can’t elevate the weak and uneven script. The crude humor, flat jokes, unrealistic romance between Deanna and a college kid (20 years her junior), cliche mean girls, a wacky friend with a foul mouth (Maya Rudolph) and strange roommate (SNL’s Heidi Gardner), all contribute to the disappointing story. Maddie is the only “normal” character who has to deal with college, her parents divorce, and a mom in mid-life crisis. I wanted to like this movie but left disappointed with more than I liked. A brief Christina Aguilera cameo was a highlight, to an otherwise lifeless, Life of the Party.