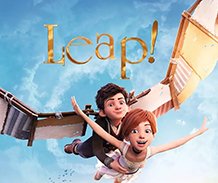 Leap!” is an animated movie set in 1879 Paris, where best friends and orphans, Felicie (Elle Fanning) and Victor (Nat Wolff), escape the orphanage to make their dreams come true. Felicie wants to be a ballerina and Victor wants to be an inventor. They escape to Paris and face some challenging situations before each gets to fulfill their dream.

The kid-friendly PG rating has only a few scenes that have angry characters chasing Felicie to hurt her, a jealous girl who causes problems and a dancing scene that takes place in a pub. Themes about…

…believing in yourself, going after your dreams and achieving them, are illustrated with several characters. I enjoyed the scenes involving the building of the Eiffel Tower and the Statue of Liberty. The animated ballet is beautifully done (I thought it was very creative, especially one scene where Felicie takes a great leap down a staircase) and should inspire kids and adults who are fans of dance. The animation is colorful, the characters entertaining and the story is interesting, so even though it got a low critics score, I enjoyed “Leap” and I’m betting your kids will too!