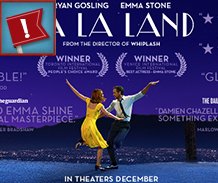 La La Land is a modern musical that takes place in Hollywood, the city of dreamers. Mia (Emma Stone) works at a coffee shop on the Warner Bros.’ lot, and dreams of becoming an actress and writer. Sebastian (Ryan Gosling) is a purist jazz pianist, taking whatever jobs he can, to earn a living but dreaming of playing in his own club. The couple struggle to maintain a relationship while doing all that’s necessary to pursue their dreams. Eventually, Seb’s friend (John Legend) offers him a gig in a band, while Mia focuses on producing her own play. As their dreams take shape and success follows, the two are faced with hard choices.

The PG-13 romantic musical has mild language and implies a couple living together but no sexual situations. There are a few dance scenes that harken back to more traditional musicals (think “An American in Paris”), combined with catchy songs, colorful sets and creative CG effects, that will definitely appeal to a new generation raised on “Glee” and “High School Musical”. I enjoyed the unique dance number in the famous Griffith Observatory and was amazed at Gosling’s piano skills (yes he really plays the piano in the movie!) I know La La Land is getting rave reviews but, in truth, it wasn’t as “Best Picture” worthy as I thought (or hoped) it would be. Stone and Gosling are better at acting than singing, but overall, “La La Land” is a visually creative and entertaining musical mature kids to adults will enjoy.