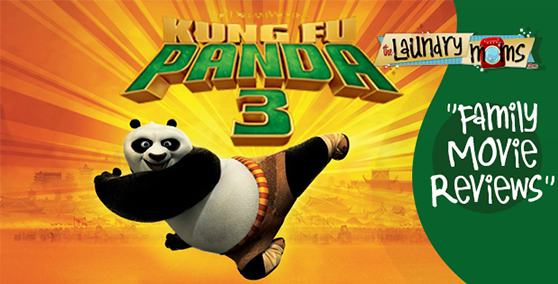 Kung Fu Panda 3 picks up with Po continuing his training and settling into his anointed role of Dragon Warrior along with his five warrior friends. One day Po’s long-lost father shows up and wants to take his son back to a secret panda paradise, to help Po discover his roots and learn what it’s like to be a panda. Everything is wonderful until the supernatural villain Kai begins to sweep across China, defeating all the kung fu masters by stealing their chi and looking to defeat his last enemy, Po. Starring a cast of favorite voices: Jack Black, Bryan Cranston, Dustin Hoffman, Angelina Jolie, Jackie Chan, Seth Rogen, Kate Hudson and many more, including three of Angelina Jolie’s children, voicing the three young pandas.

The PG family-friendly adventure is a clever and visually stunning story, energized by the lovable and charismatic Black. Attention to detailed animation and lots of colorful characters, make it the best of the trilogy all ages will enjoy.  I like how themes of the importance of family, knowing who you are and fulfilling your true purpose in life, are woven together with humor and touching moments. My favorite scenes were in the secret panda paradise with lots of cute pandas in all shapes and sizes. I got a kick out of Kung Fu Panda 3!