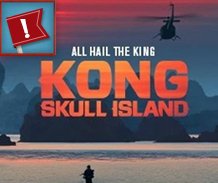 Parents this is not a family-friendly kid’s movie. You need to know that the PG-13 action-adventure is for mature audiences because of…

…of intense fighting sequences with giant sci-fi creatures that include creepy Skull Crawlers, a high body count with victims being dismembered, stomped, eaten and torn apart, lots of guns, things blowing up and brief strong language. So it’s definitely for mature audiences. Know going in, that this is a different story with a bigger Kong who is more a protector and friend than foe. It’s got hip ‘70s music, Vietnam War imagery, Huey helicopters and soldiers attacking Kong with modern weapons. Although the storyline is different, there are still scenes that give a nod to previous films, like Kong fighting a giant octopus and Larson touching his face like Fay Wray. There’s gorgeous scenery, spectacular CGI effects and a lovable John C. Reilly who practically steals the movie with his comic relief. “Kong: Skull Island” is set in the same world as Godzilla and there are hints at a larger world and future films, in fact, stay through till the very end credits for a bonus scene and you’ll see what I mean.