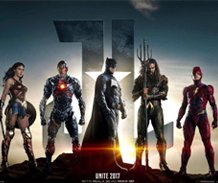 “Justice League” starts off in a world that’s mourning Superman’s death after the events of “Batman v Superman”. Batman/Bruce Wayne (Ben Affleck) unites with Diana Prince/Wonder Woman (Gal Gadot) to help him recruit a team of superheroes — including young Barry Allen/The Flash (Ezra Miller), reclusive Victor Stone/Cyborg (Ray Fisher), and rebellious Arthur Curry/Aquaman (Jason Momoa) – to battle supervillain Steppenwolf (Ciaran Hinds), who’s returned to Earth to retrieve three boxes that when joined together, will destroy the world. Hmmm Now, if only Superman (Henry Cavill) could come back and round out the team.

The PG-13 is for Sci-fi violence and action and best for tweens up. Parents, “Justice League” is DC Comics’ all-star superhero adventure with lots of explosive violence, close-up battles and mass destruction of property. This is not as dark as the first one with more humor, sarcasm and witty dialogue. Affleck is more likeable – Gadot is super cool and pure enjoyment to watch – but it’s the new characters Momoa (the perfect pick for Aquaman) and Miller (bringing a youthful energy to an older cast) – who entertain with levity and humor, making the movie work during darker scenes. With its big ensemble and messages of teamwork, courage and doing what’s best for mankind – this one is leagues above the first one. It’s not necessary to have seen “Batman v Superman” but you will get more of the references if you do. I was delighted to see the team bond for future films, much like the “Avengers” series. Don’t pay attention to the negative reviews – this is a fun popcorn movie with some of your favorite DC comic heroes! Be sure to watch the entire end credits of because there are two extra scenes that set up the sequel – especially the last one!