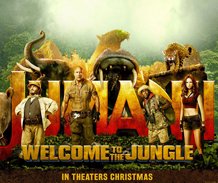 “Jumanji: Welcome to the Jungle” is a redo of 1995’s “Jumanji” but this time a video game replaces the board game. Four high schoolers are sent to detention in the basement on the same day: Popular girl Bethany, bookish Martha, nerdy Spencer and his childhood friend/football star Fridge. While snooping around they find an old Jumanji game and soon, all are sucked into the world of Jumanji where they are instantly turned into avatars. Spencer is superhero archaeologist Bravestone (Dwayne Johnson), Fridge is the short sidekick/zoologist Moose Finbar (Kevin Hart), Martha is “killer of men” vixen Ruby Roundhouse (Karen Gillan) and Bethany is a man – Professor Overton (Jack Black). To escape the game and get home, they have to work as a team to save Jumanji. Nick Jonas, Alex Wolff, Ser’Darius Blain, Madison Iseman and Morgan Turner also star.

The PG-13 fantasy action is best for mature kids to adults. There are no monsters or creatures, just large jungle animals that want to eat humans, some mild language and adult humor. The main characters have 3 lives and die multiple times but nothing too graphic or gruesome, and each character immediately regenerates. Since these are high school kids in adult avatar bodies, there’s some crude/funny dialogue dealing with mature themes: Bethany learns how to use her “male anatomy” to go to the bathroom, and she – as the Professor – teaches Martha how to flirt to “distract the bad men”. There are positive themes of teamwork, selflessness, and friends risking their lives for each other. The Rock, Hart and Black, get the biggest laughs but it’s the ensemble that delivers an action packed, fantasy adventure that is a very funny and entertaining popcorn movie!