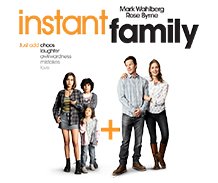 “Instant Family” stars (Mark Wahlberg and Rose Byrne) as a happy couple who buy fixer-upper homes for a living, to renovate and flip. Longing for children they can’t have, they decide to adopt older children they can “renovate”. With the help of dedicated caseworkers (Octavia Spencer and Tig Notaro) at an adoption agency, they decide to foster three siblings, a rebellious teenager named Lizzy (Isabela Moner) and her two siblings. The dramedy is based on writer-director Sean Anders and his wife’s real-life experiences fostering and eventually adopting, three young siblings.

Parents, the PG-13 rating is for mature pre-teens to adults with mature themes (including the birth mother who threatens the family), sexual dialogue, strong language and some drinking and drug references. The story focuses on the highs and lows of raising kids who come into a home already formed in personality and temperament – especially when they come from difficult circumstances. There are funny moments trying to get kids to eat, dress properly and showing how they disrupt the lives of the once organized couple. Wahlberg is perfectly cast as a wannabe dad (he’s a devoted Christian and family man in real life) and Spencer is always hilarious, she and Notaro are a perfect comic team. But ultimately, “Instant Family” is about unconditional family love, acceptance and giving kids a chance to discover who they can be in the safety of a home with loving parents.