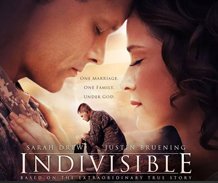 INDIVISIBLE is based on the real-life story of Army Chaplain Darren Turner (Justin Bruening) and his wife, Heather (Sarah Drew) who move to a new Army base prior to Operation Iraqi Freedom’s 2007 troop surge. The movie follows two storylines dealing with Darren’s journey as an Army chaplain fresh out of seminary, who’s deployed overseas and Heather who is left to look after their three young children (8, 6, and 10 months) while helping support other wives of Gold Star families. Jason George, Tia Mowry also star.

The PG-13 is best for mature pre-teens to adults because of the wartime violence dealing with death and PTSD (Darren holds a dead girl, a firefight between U.S. Army tanks and Iraqi insurgents, Darren leads a man to Christ who is later killed, another man loses a limb) and mature themes about marriage. The faith-based drama focuses on Darren who faces death and the terror of war, then after 15 months, returns home a different man, struggling with his faith and to assimilate back into life as a husband and father. Heather is a fully formed character: a mother with a career as a photographer; a Readiness Committee volunteer who cradles the widowed when the notification chaplains come calling; and a wife who goes through her own painful journey with her husband’s absence. Bruening and Drew give believable performances with real-life dialogue and the raw emotions of a devoted Christian husband and wife in crisis. But there are other strong stories and performances by Skye P. Marshall as a single mom/soldier who deals with the guilt of leaving her young son. Tanner Stine and Madeline Carroll play a young millennial couple in the early years of marriage with a baby and another one on the way. And Jason George and Tia Mowry are a couple dealing with alcoholism and marital problems. The story raises real issues dealing with real problems and legitimate questions about faith (Why does God save some and not others, anger at God and questioning faith). Ultimately faith and love bring restoration and healing. I enjoyed this movie and was moved by several scenes.