“Independence Day Resurgence” is a follow-up to the 1996 blockbuster that takes place 20 years later, as the Fourth of July nears and America has rebuilt a defense program with the help of extraterrestrial technology.  A returning cast is quickly introduced; Jeff Goldblum, Bill Pullman, Brent Spiner, Judd Hirsch and Vivica A. Fox. As well as a cast of younger newcomers; hotshot pilots Liam Hemsworth and Jessie T. Usher (portraying the son of the original Will Smith character), Maika Monroe (as Pullman’s jet pilot daughter who’s engaged to Hemsworth) and Chinese actress Angelababy who plays the pilot-daughter of a commander based on the moon. A huge cast of others also star.

The PG-13 adventure (for sci-fi action and lots of language) is technically and visually thrilling, with a… 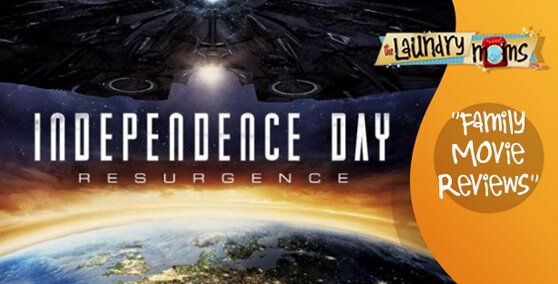 3,000-mile-wide mother ship approaching Earth, a creepy giant alien (similar to the horrific Queen creature in “Alien”) searching for a secret weapon America is hiding, and a seemingly invincible enemy fleet wreaking destruction as the moon, ocean and cities, are sucked into the sky and the world is under attack. Once again, it’s up to America’s bravest to save the world from total destruction.

I have to admit, I enjoyed this cheesy, implausible, spectacle-driven story with too many plot holes, lots of wisecracks and likable characters. This is a perfect popcorn movie for Sci-fi fans, laced with a subliminal message of heroism, pride in the American spirit and the importance of freedom and sacrificing for the good of others! And it’s also a perfect summer movie to remind us all to celebrate our freedom on Independence Day!