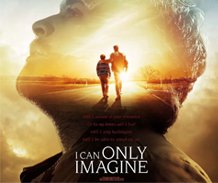 Holly on Hollywood
“I Can Only Imagine”
by Holly McClure

“I Can Only Imagine” is based on the true story about Bart Millard (Michael Finley) singer-songwriter of the Christian band Mercy Me (named for his grandmother’s favorite expression), who had a dream of using his talent in singing and songwriting, to forget about his abusive childhood with his alcoholic father (Dennis Quaid). Millard encounters obstacles along the way; a football injury, career disappointments and romantic problems with his childhood love (Madeline Carroll), that ultimately leads him to his dream and fulfils his father’s dying wish.

The PG friendly story begins with Bart’s rough childhood after being abandoned by his mother and raised by an abusive father. Wounded by disappointments in life and hurt by past pains, Bart sees his father’s transformation of faith, after he’s told he has terminal cancer. It’s that faith that changes Bart’s life and gives him a divine purpose, inspiring him to write the infamous song. “I Can Only Imagine” took minutes for Bart to write, but a lifetime for him to craft and has sold millions, transforming countless lives. Finley gives an impressive performance but it’s Quaid that nails the emotional transformation of the father’s life and soul. The film also features Cloris Leachman as Millard’s grandmother, Priscilla Shirer as his encouraging music teacher and country singer Trace Adkins, who provides some comic relief as the band manager. “I Can Only Imagine”, is unabashedly a faith-based film (easily one of the best I’ve seen) with a message of forgiveness, love and redemption. Everything about this movie works: the acting, the story, the music, the direction, the addictive song – making it a movie that will reach beyond the church crowd and appeal to the multi-generational masses. I loved this movie from beginning to end and it’s perfect to take a non-believing friend with you!