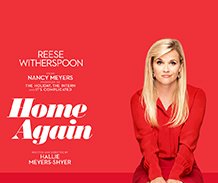 Home Again” stars Reese Witherspoon as Alice, a newly separated mother of two girls who moves to LA into the home of her late father, a famous Hollywood writer/director, to start a new life after separating from her husband. On her 40th birthday, while celebrating with girlfriends, she meets three twenty something aspiring filmmakers Harry (Pico Alexander), Teddy (Nat Wolff), and George (Jon Rudnitsky) at a club. The group parties hard, goes back to her house and all pass out. The next day…..

…her mom (Candice Bergen) brings her granddaughters home, meets the aspiring wannabe filmmakers and convinces Alice to let them stay in the guest house. The happy pseudo family is upset by the arrival of Alice’s estranged husband Austen (Michael Sheen), who wants his family back.

The PG-13 rating is for language, religious profanity, an implied sexual situation and mature themes. I enjoy most Witherspoon movies and admire Nancy Meyers movies (The Holiday, The Intern), so I was hoping her daughter, director Hallie Meyers-Shyer, would deliver the same. But “Home Again” is a disappointing formula comedy full of questionable content for kids like; Alice letting 3 twentysomething strangers live in her guest house (for free) and spend time with her 2 young girls after one night of drunken partying, Alice in a relationship with 27 yr old Harry in front of her daughters and more.  Alice is caught in a tug-of-war between her ex and her new found family of 20 somethings – and there are a few laughs when there’s a brief confrontation with the ex. But overall, the story lacks depth and so do the hard-to-believe characters. This is light entertainment that has a few funny moments but is too mature for kids and too immature (and unbelievable) for adults.