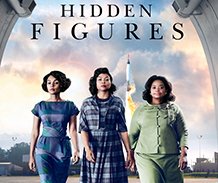 “Hidden Figures” is based on the true stories about three black women Katherine (Taraji P. Henson), a mathematical prodigy, Dorothy (Octavia Spencer) a computer supervisor and aspiring engineer Mary (Janelle Monáe), who worked for NASA during the 1960’s, in a racially segregated, male dominated workplace. Katherine is a mathematical genius who’s assigned with getting John Glenn (Glen Powell) and other astronauts, to and from space.  Al Harrison (Kevin Costner) is her supervisor who sees her potential and protects her from unfriendly fellow workers. Dorothy is repeatedly denied a promotion and treated with disdain by her immediate boss (Kirsten Dunst). And Mary is denied the chance to become an engineer when she tries to take graduate-level physics courses. Jim Parsons also stars.

The PG drama has mild language and deals with mature themes of women overcoming racism, discrimination and other obstacles, to pursue their professional ambitions in a 1961, racially segregated workplace, where sexism was widely accepted. They were denied promotions, told to only use “colored bathrooms”, were denied access in a library and more. Thankfully, in the end there is redemption and honor, given to all three women.  As a child, I remember watching John Glenn (and other astronauts) launch into space (and return) with the world watching. It was an achievement that put America at the top of the Space Race. “Hidden Figures” is an inspiring story of the women who helped make that possible (including photos of the real women and actual footage) and will encourage young and old, to follow your dreams that could change the world!
“Remember to Choose Your Movies Wisely”