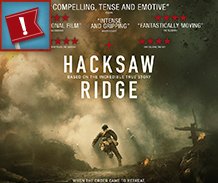 Hacksaw Ridge, is based on the true story of Desmond Doss (Andrew Garfield), an Army medic who refused to carry a gun because he believed in saving lives instead of taking them. He was the first conscientious objector to be awarded the Congressional Medal of Honor after refusing to touch a weapon. We first see Doss as a young boy growing up with an abusive father (Hugo Weaving), in the Blue Ridge Mountains of Virginia. He falls in love with Dorothy (Teresa Palmer) but before they can marry, he joins the army. He quickly becomes at odds with his Sarge (Vince Vaughn) who is both funny and a worthy warrior, his Captain (Sam Worthington) and the men he serves with, who fear he won’t defend them in battle. After beatings, harassment and ultimately winning a court-martial, Doss is sent to Okinawa, Japan, to fight in the brutal battle at Hacksaw Ridge. Throughout the night he ends up saving 75 injured men and becoming a hero to his fellow soldiers.

Parents, this is an R rated story for mature audiences….

who can handle intense wartime violence, bloody scenes with body parts, a brief scene of rear male nudity, mature themes and religious harassment. But this is a powerful and profoundly moving war story – and I loved every minute of it! Garfield is perfect as the lanky, wide-eyed, gentle spirit, who stands valiantly for his beliefs, as he carries his bible into battle instead of a gun. Mel Gibson perfectly directs this nostalgic look at the indomitable human spirit and a man’s faith and reverence for God, that miraculously worked together to save the men on Hacksaw Ridge.