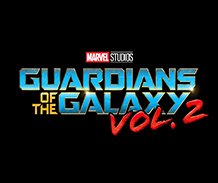 Holly on Hollywood
“Guardians of The Galaxy-2”
by Holly McClure

“Guardians of the Galaxy Vol. 2” picks up where our galactic superheroes left off – on a mission to save the galaxy!  Peter/Star-Lord (Chris Pratt) and his band of renegades; Gamora, Rocket Racoon, Drax the Destroyer and Baby Groot, are joined by Gamora’s sister Nebula and the blue faced Yondu, as they face new enemies, battle old ones and visit the planet of Peter’s celestial biological father, Ego (Kurt Russell), who has searched for Peter since the day he was born. Also starring Zoe Saldana, Dave Bautista, Karen Gillan, Michael Rooker, Sylvester Stallone and the voices of Bradley Cooper and Vin Diesel.

The PG-13 Marvel Sci-fi action adventure is best for mature pre-teens to adults….

because of the sexual innuendos, a discussion about an aliens anatomy, a few profanities and lots of battle action. The adorable Baby Groot will steal your heart with his big eyes and cute expressions – he almost steals the movie in an opening dance number. In another scene he is bullied and tormented by the bad guys, which is hard to watch. There’s a bar with prostitute robots that act suggestive but nothing explicit is shown. And an abundance of fistfights, gun battles, fatal flying arrows, an ugly space monster and an even uglier bad guy called Taserface (Chris Sullivan from “This Is Us”).

Pratt and his crew of misfits are all so likeable; you want to hang out with them. Add to that the awesome 80’s classic music (“Hooked on a Feeling,” “Spirit in the Sky”), cultural references, witty dialogue, hilarious one-liners, a running gag about David Hasselhoff being a father figure to Peter and the gut-busting laughter from Drax, and you have a fun and entertaining movie that leaves you smiling, thinking of all the funny scenes. Be sure and stay through the credits to the very end, with surprise clips and the words I AM GROOT that reveals the real person. Can’t wait for GOTG Vol. 3!