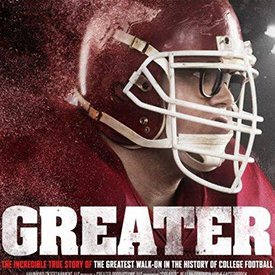 Greater  is the real-life story of Brandon Burlsworth, considered to be the greatest walk-on in the history of college football who captured the heart of all who knew him and has long been admired by the many who know his legacy. Brandon (Christopher Severio) is an overweight kid who overcomes hardships in life to achieve his dream of being a University of Arkansas Razorback but was considered too short and too fat to play Division I. Brandon is constantly harassed by his brother (Neal McDonough) who doesn’t believe… 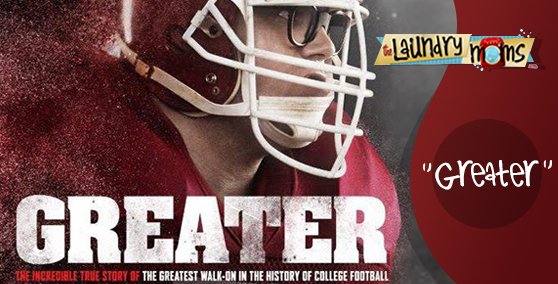 …he can make it and faithfully supported by his loving mom (Leslie Easterbrook) who knows her son can achieve whatever he wants with his strong faith.

The PG rating is for mature themes and mild language. The story is more for older audiences who can appreciate the emotional story of Brandon, the heartache he goes through to become a football player and the tragedy of his death. There are moments of faith and references to God and His faithfulness which will resonate with Christian audiences.  An extremely devoted Christian, Brandon never cursed or drank and was genuinely kind, humble and low-key, embodying the true nature of a Christian. He worked harder than anybody, on and off the field, becoming the first Razorback to earn a Bachelor’s and Master’s degree while still playing. Eleven days after being drafted into the NFL, Brandon was tragically killed in a car accident which devastated his family, teammates and the nation. The overly-fat kid who was once an embarrassment to his teammates and an annoyance to his coaches, ended up becoming the most respected player in the history of the program, changing the lives of all who knew him!