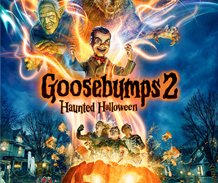 GOOSEBUMPS 2: HAUNTED HALLOWEEN is based on R.L. Stine’s popular children’s horror book series, about two best friends, Sam (Caleel Harris) and Sonny (Jeremy Ray Taylor) who discover a mysterious book that brings a ventriloquist dummy to life. “Slappy” is mean and uses his powers to unleash Halloween decorations, monsters, and mayhem, on the town. Slappy wants to be part of a “human” family and kidnaps Sonny’s mom, turning her into a human dummy. It’s up to the boys and Sonny’s older sister, Sarah (Madison Iseman), to save the town before it’s too late.

The PG rating is not kiddy friendly – it’s best for kids 8 and above. There’s a creepy talking dummy with powers to control things that won’t die, scary looking ghosts, witches, monsters, and a house-size spider made of purple balloons, that comes to life because of Slappy’s magic. There are funny scenes kids will relate to like a school science project gone wrong, siblings fighting, Halloween decorations chasing people and tiny gummy bears morphing into giant ones that want to eat the boys. Some scenes are more intense than terrifying – some scarier than horror. But overall it still may be too much for little ones. Jack Black plays R.L. Stine but is hardly in much of the movie. Older kids to pre-teens who enjoy the books will find “Goosebumps 2” a fun treat for the Halloween season.