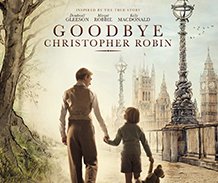 Goodbye Christopher Robin” is the story of author A. A. Milne (Domhnall Gleeson) who was inspired to write the world-renowned tales of “Winnie-the-Pooh”, based on his young son Christopher Robin (Will Tilston), who his mom Daphne (Margot Robbie) lovingly called, Billy Moon. The visually beautiful story tells the touching tale of Billy’s sweet relationship with his father, his distant relationship with his mother and his devoted affection for his beloved Scottish nanny, Olive (Kelly Macdonald), better known as Nou. After Milne returned from the war with PTSD, Daphne had a baby to “cheer him up” but soon….

…she becomes frustrated with Milne’s inability to write. She moves to London, abandoning her husband and child. Billy is naturally devoted to his nanny but when Nou is called away for family illness, Billy and his father are left to get to know each other. The two develop a sweet bond with quality time, taking walks and literally creating the “Winnie-the-Pooh” stories. Milne writes the book, it soars to fame and thrusts the family, and Billy, into instant celebrity status. Little Christopher Robin becomes the most famous boy in the world and the book, a treasure for generations to come.

The PG story is more for adults than kids because of mature themes about PTSD, dysfunctional (and sometimes) cruel parenting and themes of fame and how it affected Billy’s adult life. I enjoyed the back-story and learning how the animals got their names, etc. It was also interesting seeing how the parents exploited their famous son, then realized the errors of their ways and sent Billy to boarding school to try and save his childhood. The torment he went through, the bullying, the loneliness, shaped his adult life with redemption and peace in the end. The visuals are beautiful, the forest magical, little Will is absolutely adorable, and it’s rewarding knowing how Poo and his sweet friends came to be, in a book that has impacted children to adults.

Related articles across the web