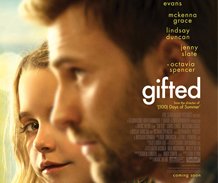 Looking for a heavier and more mature themed movie? Look no further than the movie Gifted. It’s not for younger audiences but is still a good choice.

“Gifted” is a different kind of family film about an uncle, Frank Adler (Chris Evans) who single handedly is raising his niece Mary (Mckenna Grace) in a small coastal town in Florida. When his sister passed away, Frank promised he would give Mary a normal life, so when Mary is 7, she’s sent to school. On the first day her teacher realizes that Mary is a child prodigy, a mathematical genius. When…

Frank chooses to ignore the offer to put Mary is a special school for the gifted so Mary can live a normal life, the school brings the meddling grandmother in and Frank and Mary’s sweet and simple life is forever changed. Octavia Spencer also stars.

This is a layered story that deals with many adult issues like suicide, parental abandonment, foster parents, bullying and family issues, as well as a child being a prodigy in math. Those issues along with some mild language makes “Gifted” more for mature teens to adults, so parents heed the PG-13 rating.  The important message is about the love between Frank and Mary and the courage Frank takes to keep their family together, proves there’s more to life than the fame that comes with being a genius. I liked this movie and loved the talented performances by Evans and Grace but it’s definitely more for mature pre-teens to adults.