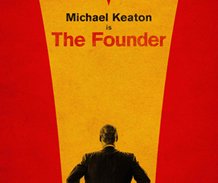 “The Founder” is based on the story of the McDonald’s chain founder, Ray Kroc (Michael Keaton), a salesman who met Mac and Dick McDonald (Nick Offerman and John Carroll Lynch) running a hamburger stand in 1950’s California.

It begins with Kroc’s…

…obsession with the brother’s unique idea and ends with the power-hungry Kroc ruling a billion-dollar empire, built by exploiting the trust of the brothers. Kroc bought their name and idea at a low price and robbed them of any future royalties with the help of finance master Harry Sonneborn (B.J. Novak) who taught Kroc how to beat them at their own game. It also delves into Kroc’s personal life depicting his marriage to Ethel, who he divorced for a younger woman. Laura Dern, Linda Cardellini also star.

The PG-13 drama is for brief strong language and a storyline that will appeal mostly to mature teens and adults, who’ve grown up with the golden arches. The movie is filled with photos and old footage that reminds us of the simple beginnings and a brilliant performance by Keaton, who is fascinating as the ruthless salesman, driven by ambition and greed. Watching Kroc out-think the McDonald brothers and destroy their lives left me sadly seeing the golden arches in a different light but I truly enjoyed this fascinating story. “The Founder” is a poignant reminder that the old-fashioned way of doing business – with a person’s word and a handshake – is no longer considered the art of the deal in today’s ruthlessly savvy commerce.