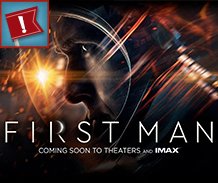 “First Man” is the story of NASA’s race in space mission to land on the moon, focusing on astronaut Neil Armstrong during the years 1961-1969. The story explores the sacrifices made on Armstrong and his family, other astronauts and their families and on a nation divided about spending money on a space race.  Ryan Gosling, Claire Foy star.

The PG-13 is for brief language, mature themes about the death of a young child, the death of fellow astronauts in a fire, the brutal training and testing the astronauts go through and lots of scenes with no dialogue so it’s not for young children – definitely pre-teens to adults. The drama biography is artfully done showing the spectacular moment in human history when Armstrong takes that “one small step for man, one giant leap for mankind”. The visuals are impressive putting you inside the mind and body of astronauts as they go through training, crashes, breaking the sound barrier, etc. giving the audience a realistic sense of how hard it must have been. This is a respectable biopic and an impressive display of film craftsmanship but it failed to emotionally connect me with the characters or story. More than a third of its run-time is frustratingly lifeless, lots of visuals but not a lot of dialogue – which is what emotionally connects me to the characters.  When we finally get to the moon and Armstrong’s famous line – I wanted to be emotionally moved to tears but wasn’t. First Man is less about the moon landing itself (leaving out the American flag being placed on the surface) and more about a man who suppressed his emotions and poured himself into his work. What you DO get is a first-person, loud and realistic sense, of what it felt like to fly in one of the earliest supersonic planes and ride a rocket into space. It’s a good movie – but I wanted it to be great.