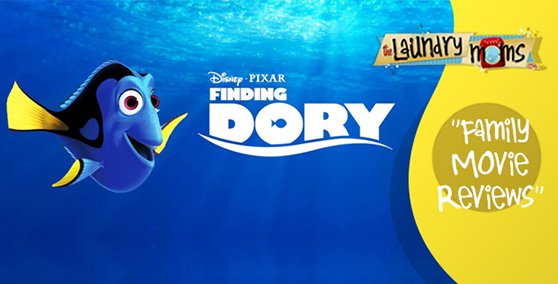 …back old favorites from “Nemo” (the cool turtle dude Crush and son Squirt, Mr. Ray and the “Mine! Mine! Mine!” seagulls) along with new friends, who help the determined Dory with her mission. Pixar delivers their signature, gorgeous animation that looks real, in a story that’s endearing because of original, clever dialogue from DeGeneres, whose goofy, giddy persona and child-like glee, keep it entertaining and emotionally moving. Parents, you may have heard the controversy about the very brief but much-discussed scene that shows (what looks like) a lesbian couple with a baby, but co-director Andrew Stanton says, “They can be whatever you want them to be. There’s no right or wrong answer”. There are lots of funny one-liners and numerous hilarious scenes (too many to mention) including one of my favorites, the “touching pool” scene, where Dory and other petrified fish try to avoid the grabby hands of bratty children trying to touch them.

“Finding Dory” will capture the hearts of a new generation and deliver an emotional message about family and friends with a tearful, happy ending, that includes a couple of surprise scenes after the credits!