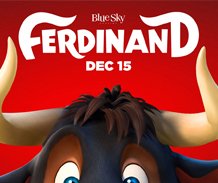 “Ferdinand” is an animated story based on the beloved 1936 children’s classic, about a large Spanish bull (voiced by John Cena) born to fight in the ring like his famous father but instead, prefers flowers and friendship to fighting. Ferdinand runs away to find freedom but is mistaken for a dangerous animal by local townsfolk and taken back to the Casa del Toro. He meets Lupe (Kate McKinnon) a friendly “comfort goat” who wants to be a coach to Ferdinand and train him to fight in the ring and win! In all of his adventures, Ferdinand proves you can’t judge a bull by its cover.

The PG is for bully dialogue, some crude humor and bullfighting scenes, but no blood. Lots of jokes are made about Ferdinand’s size, he’s bullied by other animals who call him “flower boy,” “loser,” and “dork, his dad leaves for a fight and never returns leaving Ferdinand to call after him and weep. And several funny scenes include a trio of wisecracking hedgehogs who keep Ferdinand company – and a funny bull-in-a-china-shop scene. The movie has strong messages of nonviolence, respect for Ferdinand’s principles, and the friendships that can develop between creatures who are very different from each other. Ferdinand finds clever ways to avoid violence and conflict, including humor and kindness. This is a charming and sweet true-to-the-book story, about a bull who’s a lover, not a fighter, with a likable hero that’s surprisingly funny, has cute songs and a message that “weird is the new normal”. All ages will enjoy “Ferdinand”!